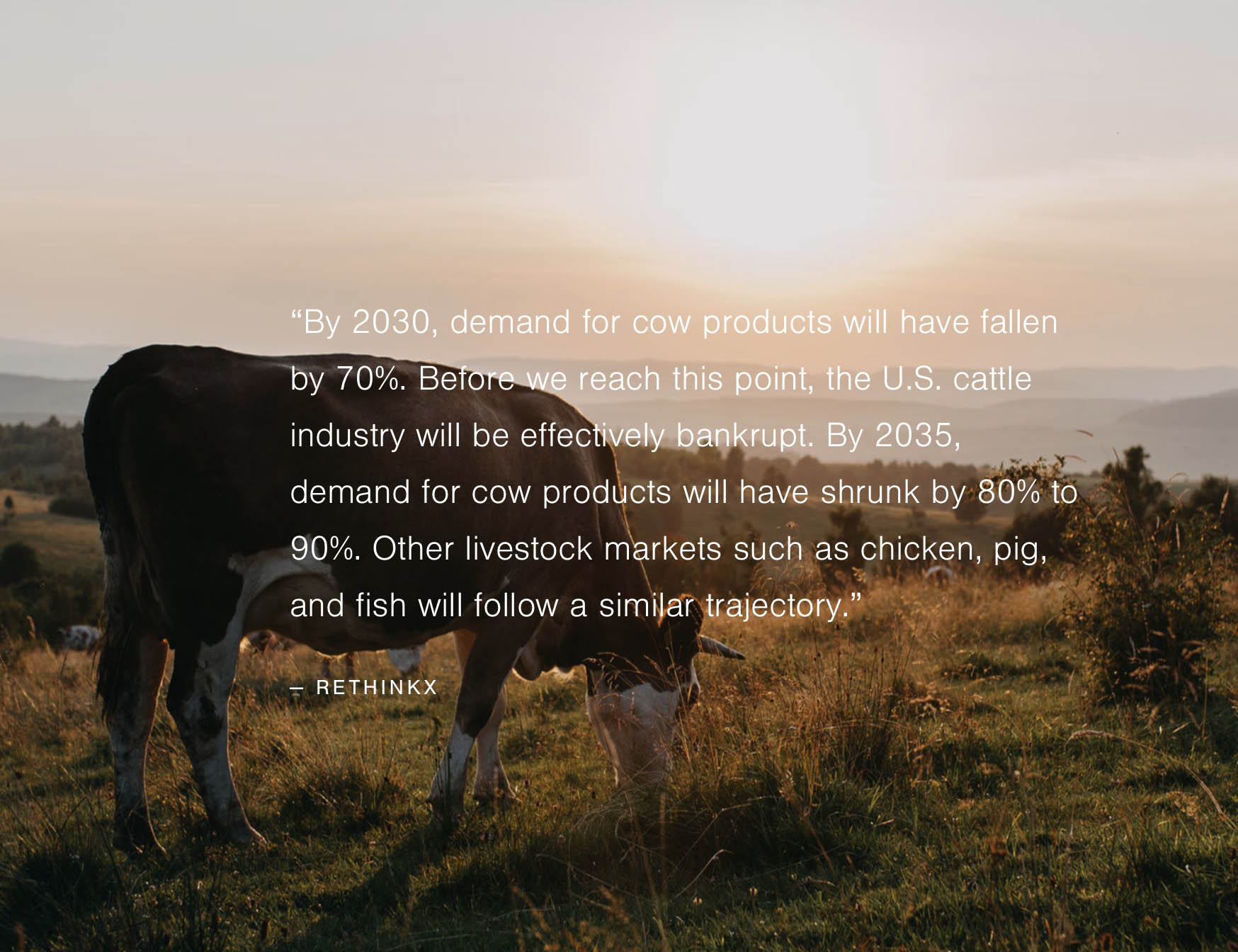 Plant-based food products, including meat alternatives like Beyond Meat and Impossible Burger and alternative milk products like Elmhurst milked oats, are driving growth across the entire wellness industry.

The growth we’ve seen is only a drop in the bucket according to a new report, and it is signaling a major sea change in how we feed ourselves.

RethinkX, an independent think tank specializing in technology-driven disruption analysis, has issued a report detailing how the plant-based foods industry is leading an economics-driven “protein disruption” that will drive down costs and yield more convenient, nutritious and better-tasting food products.

As a result, industrial animal farming is expected to shift dramatically, with the number of cows in the U.S falling by 50% by 2030.

Precision biology is driving the shift. This has led to a new model of production the report calls “Food-as-Software,” in which scientist-engineered molecules are uploaded to databases that act as “molecular cookbooks” that “food engineers” anywhere can use and improve upon the way that software developers design apps. This includes techniques like “precision fermentation,” a process that programs micro-organisms to produce almost any complex organic molecule. Coupled with existing plant-based techniques and formulas, Food-as-Software is a powerful change agent in a global food system begging for it.

“This model ensures constant iteration so that products improve rapidly, with each version superior and cheaper than the last. It also ensures a production system that is completely decentralized and much more stable and resilient than industrial animal agriculture…”

Environmental benefits would be profound, with an estimated reduction in greenhouse gas emissions falling by 45% by 2030. Nutritional benefits could mean a deep impact on public health, not only with reductions in foodborne illness, but also in heart disease, obesity, cancer and diabetes — which costs the U.S. an estimated $1.7 trillion annually.

Industry data supports RethinkX’s prediction. According to the Plant-Based Foods Association, The Good Food Institute, and data it obtained from industry leader and Grovara partner SPINS, plant-based food sales grew by $1.1 billion between April 2017 and April 2019 and at a rate 5.5 times faster than total food. It’s clear that the growth is being driven by milk, meat and creamer alternatives.  Plant-based milk (6%) and yogurt (39%) are growing while their traditional dairy-made counterparts are falling (milk and yogurt has each shrunk 3%).

While RethinkX’s report is likely to excite those embracing lifestyles and business models that emphasize climate and societal considerations, some caution is urged. The think tank issued a similar report in 2017 touting the imminent arrival and rapid adoption of fleets autonomous electronic vehicles offering TaaS, or Transport-as-a-Service has been criticized for not fully considering nuances of the oil industry, but clearly the jury is still out.

It’s hard to argue, though, against the plant-based data and how meat alternatives have taken the world by storm. That’s why Grovara has embarked on an initiative to become the largest North American exporter of plant-based food and beverages by the end of 2019. The result will be an international B2B plant-based “aisle” available only on Grovara’s first-of-its-kind B2B e-commerce platform.