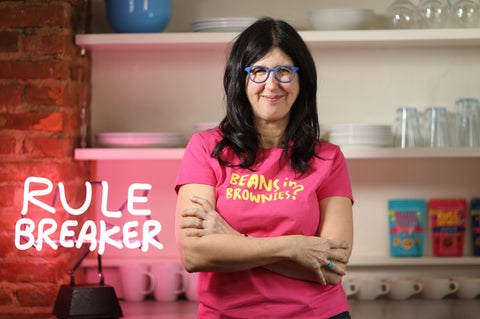 Former health journalist and certified health coach Nancy Kalish points out that consumers have traditionally had to expect to give up taste and satisfaction in order to eat more healthfully or accommodate food allergies and other dietary restrictions. Kalish lived this first hand after becoming a vegan nearly a decade ago.

When she began experimenting with a brownie recipe that used beans, she came upon the inspiration for her plant-based brand Rule Breaker Snacks, which indeed shatters all of what we thought we knew about healthy eating. Rule Breaker’s line of innovative vegan, gluten-free, and allergy-friendly treats are taking the world by storm, having tripled sales last year.

“We show consumers that they don’t have to sacrifice anything to eat right, and that keeps them coming back for more,” says Kalish, who founded the company in 2015. “And since all our products check off lots of boxes, we make it easy for consumers to buy one product to solve the different dietary needs and desires that often exist in the same household.”

That doesn’t mean that household members won’t be fighting over her soft-baked cookie and brownie bites that are great-tasting, chewy, and provide a satisfying texture. Rule Breaker Snacks are vegan, top 11 allergen-free, lower in sugar, and contain no preservatives. They also come in popular flavors like Birthday Cake Blondie and Deep Chocolate Brownie Bites.

Rule Breaker, which is available in more than 3,500 retail locations across the U.S., has done limited exporting in recent years. With the rise of plant-based food and lifestyle – Bloomberg Intelligence predicts a staggering 451% growth in the plant-based global food market to $162 billion in the next decade – Kalish knew it was time to truly go global. So Rule Breaker joined the Grovara platform in 2021 and has sold to buyers in China, Kuwait, and Mexico.

“Plant-based brands are now at the forefront of innovation in food, they’re accessible everywhere and they taste amazing!” says Kalish. “While it’s still hard to go completely vegan – believe me, I know – it’s incredibly easy and convenient to add delicious plant-based products to your diet.”

Kalish said that exporting was extremely labor-intensive and it was difficult for Rule Breaker’s small team to give overseas sales the attention it needed while simultaneously growing its business in the U.S.

“We were attracted to Grovara because of their expertise and contacts in the global marketplace and it has definitely paid off in foreign sales,” says Kalish. “Grovara has sold our products aggressively and handled all the paperwork and the headaches, leading to a big jump in our exports.”

Rule Breaker was already in high-growth mode when Bimbo Ventures, the venture capital arm of the largest baking company in the world Grupo Bimbo (Bimbo, Entenmann’s, Sara Lee, Arnold), made a minority investment in the company last February.

“They really understand our business and are using their vast expertise to help us grow both in the U.S. and global markets,” Kalish says.

In the coming year, Rule Breaker will be rolling out new flavors and an innovative line extension that will bring Rule Breaker Snacks  into a whole new day part and expand its customer base. The company also launched an equity crowdfunding campaign in which it is welcoming investors around the world to become official “Rule Breakers” and help fuel its global growth. The campaign has already raised 362% of its original goal with new investors joining every day.

Kalish has navigated the pandemic by ensuring Rule Breaker has a rock-solid supply chain in order to maintain the brand’s growth.

“That means lining up alternative suppliers for all your ingredients, packaging, and even production,” she says. “That way, you’ll be ready to take on new opportunities with confidence.”