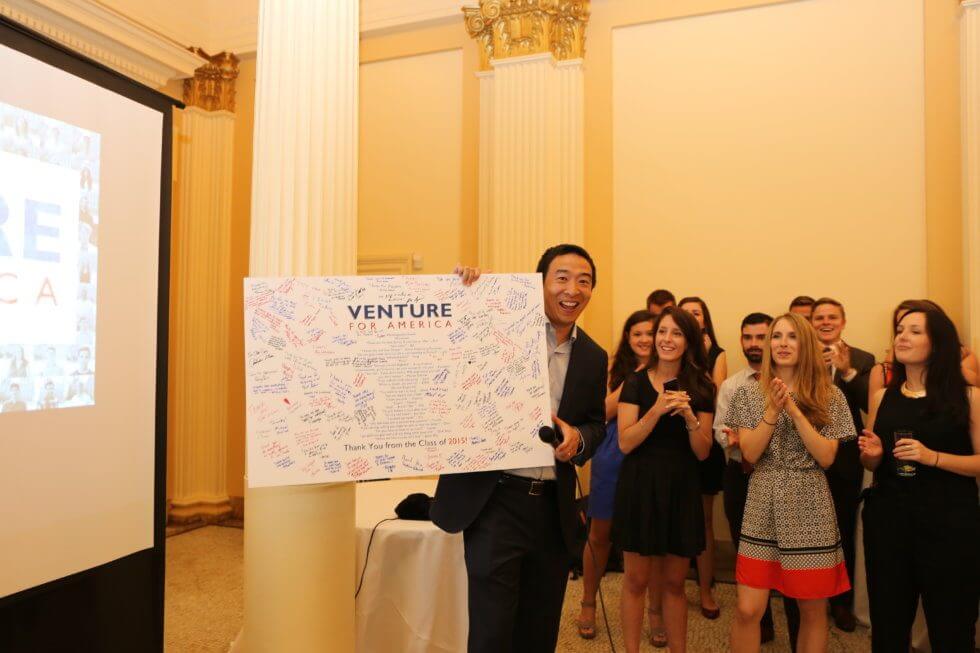 Michael Hsun had been playing his cards just right.

He left Singapore for Carnegie Mellon University, and after graduating in 2016 with a degree in Economics, Hsun “took the road everyone else was going” and became a consultant on Wall Street.

After a year or so, Hsun started to wrestle with fear of regret, that if he truly wanted to make an impact and leave a legacy, he only had a certain window of opportunity that would close significantly the older he grew.

That’s why Hsun decided to choose a different path.

VFA, the two-year fellowship program for recent college grads who want to work at startups and create jobs in American cities, has had an elevated profile in recent months thanks to the sustained Democratic Presidential Campaign of VFA founder and former CEO Andrew Yang.

If anything, Yang’s ability to capture so much support and momentum from essentially an unknown position, reinforced VFA’s core value: a community of builders who want to help develop startups and create jobs that contribute to a better future.

“The tipping point for me was the fear of regret,” says Hsun. “I have taken many risks and failed many times but there’s no way I would have been where I am today if I didn’t have that full experience.

“I’m grateful for the opportunity.”

Hsun, who started with Grovara earlier this year, is focused on East Asia in particular, which gives him an incredible opportunity to combine important startup work with the love he holds for the region.

“When I was introduced to (Grovara founders) Peter (Groverman) and Abu (Kamara), I was very lucky,” says Hsun. “I always had an interest in doing business back in Asia and I felt I would bring a lot of value.”

Hsun grew up in Singapore, which he described as “probably the most cosmopolitan and globalized country” in the world. He notices changes, though, there and in the region that represent great opportunity for the American wellness brands he is selling.

“I can recall 10-20 years ago, there were a lot of products I could only get in the U.S. and when I used to come back from the States with my family, we’d bring an extra suitcase with purchases we couldn’t get back (in Singapore),” says Hsun.

“That doesn’t happen anymore. There is more demand and U.S. manufacturers are starting to pay more attention there.”

Hsun especially sees opportunity for Grovara’s B2B ecommerce marketplace, a proprietary and data-driven technology platform that makes global trade as easy as a few clicks in a safe and secure environment.

“Online retail dominates the landscape for most of Asia,” says Hsun. “I also think Grovara stands for a lot of values Asian consumers care about — safety and trust. And ‘Made in the USA’ is a stamp of approval.

“Being an arbiter of data with this great partnership with (wellness industry insights leader) SPINS allows Grovara to more efficiently and concisely connect brands and retailers than anyone on the planet.”

Hsun’s impact at Grovara has been overwhelmingly evident and has the company getting in line for more of his brand of lead-by-example enthusiasm and laser focus.

“Usually I’m the first-in and last-out of the office, not anymore. Michael constantly has me beat,” says Groverman, Grovara’s CEO. “We expect and look forward to huge things from him, and I really hope we get more VFA employees on-board, too.”

Even in a sea of fellows with impressive resumes, Hsun stands out, according to VFA’s Director of Community Partnerships in Philadelphia, Alison Garber.

“Every fellow is special in their own right, but Michael is unique in that he spent a couple years working before joining the program so he has his feet under him a little more,” says Garber, who oversees VFA’s 55 fellows currently placed within a pool of 80 city startups with 100 more alumni.

“Also, sales is hard. To want to seek out a role in sales takes a special person. If you can succeed in sales, you can do anything. I think he comes with a lot of awareness and maturity.”

Both Hsun and Garber think Philadelphia is particularly fertile ground for startups. Hsun admits he never would have considered Philly as a destination had it not been a part of VFA, and that while there’s a lot going for the city’s startup scene, talent retention and investment are still areas that need attention.

That’s why it’s important that programs like VFA exist, and companies like Grovara recognize the value they bring to a rising tide that can lift all boats.

“There’s something about the city, our fellows are actually building companies here that are hiring and creating jobs,” says Garber.

“There’s a lot of opportunity here vs other cities. (Our fellows) can see themselves building here.”